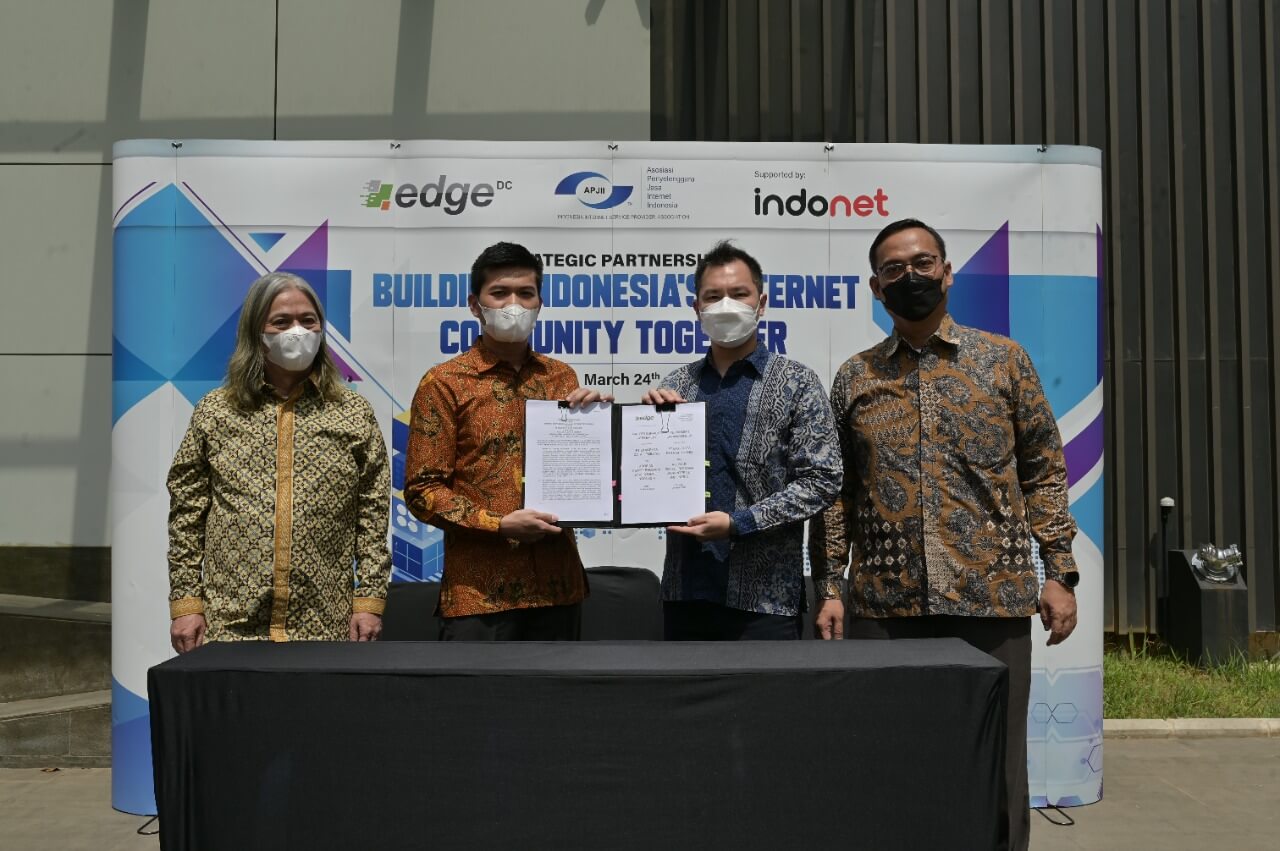 PoP IIX’s presence at EDGE1, which is a purpose-built data center in downtown Jakarta, would make APJII members at ease to connect with IIX, one of the largest internet exchanges in Indonesia. IIX will localize network traffic and establish direct connection between network operators, resulting in a better customer experience through low latency. Even more, as a result of the strategic partnership between EDGE DC and APJII, Indonesia’s internet infrastructure will increase significantly with the support of EDGE1’s world-class technology facilities.

Indonesia’s total internet users will expand to 201.37 million in 2021, according to Statista, with a penetration rate of 72.87 percent. According to APJII’s internal data, there are 341 Internet Service Providers (“ISPs”) connected to IIX as of March 2022, with a  total of internet traffic by 1.7 terabyte per second (“Tbps”). “The rapid growth of the digital economy in Indonesia requires the procurement of reliable digital infrastructure. Our goal is to maximize network performance, as well as create a seamless user experience for enterprises, digital content providers, and cloud computing service providers,” said Stephanus Oscar, CEO of EDGE DC.“We are very excited to be working with APJII in the EDGE1 data center, especially to strengthen our collective value that will provide various choice in interconnection services for our customers.”

“We believe that reliable connectivity and technology infrastructure are the primary foundations of digital business in Indonesia,” said Muhamad Arif, chairman of APJII. “Of course, we are hopeful that we will be able to collaborate with EDGE DC because we share the same vision of supporting our members in providing high-quality internet services to Indonesians.” “We expect that the existence of IIX at EDGE DC will serve as an alternate place for the development of a carrier-neutral interconnection ecosystem in Indonesia, as well as to meet the high bandwidth and low latency requirements of today’s applications,” he added.

The President Commissioner and co-founder of PT Indointernet Tbk (“Indonet”), Otto Toto Sugiri, also attended the signing ceremony which was held in front of the EDGE1 facility, a data center facility that started operating in October 2021. Stephanus Oscar and Muhammad Arif represented the parties who signed the cooperation between EDGE DC and APJII.

“As an early member of APJII, Indonet is proud to support this partnership and believes that it will bring value to the internet ecosystem in Indonesia. Digital transformation has progressed rapidly in the last 2 years, and Indonesia has benefited from the internet infrastructure that supports the growth of our digital economy. This collaboration between APJII and EDGE DC will provide technology infrastructure solutions that are closer to end users.” said Toto Sugiri.

About Internet Service Provider Association (“APJII”) The Internet Service Provider Association, known as APJII, was formed at the First National Deliberation (“MUNAS”) in Jakarta on May 15, 1996. APJII is an association that is well-known for supporting the development of the Internet in Indonesia. As an association that is an internet service provider organization, APJII is also an “operator” of the Indonesia Internet Exchange (“IIX”). APJII is a community-based organization that regulates IIX on a not-for-profit basis to support efficient interconnection between internet service providers that hold operating licenses in Indonesia. The presence of the IIX, which is operated by APJII, has effectively increased the speed of internet access for the people of Indonesia.

About PT Indointernet Tbk Established in 1994, PT Indointernet Tbk (Indonet) is the pioneer in providing information and communication technology (ICT) total solutions and has succeeded in becoming a leading role model in Indonesia’s ICT sector. Throughout its journey, Indonet, the country’s first commercial Internet Service Provider, has transformed into a digital infrastructure provider. Today, Indonet focuses on building a complete ecosystem for corporate clients through the provision of multi-connectivity solutions, data center, and cloud services.